Ten years ago you never worries about your phone crashing, or slowing down to a halt because it had been filled up with so many apps. But now, the biggest problem now facing smart phones is the startling rise of mobile malware.

But the threat to phones is new, and so mobile antivirus apps are not quite at the same level of sophistication as those for personal computers. Although Windows Phone and the iPhone are not immune, Google’s Android is probably the most affected by malware with Android malware doubling in the last six months alone. Google has recently pulled 22 malicious apps from Android Market, but because of the open nature of Android there are plenty of threats from apps downloaded from the Internet.

Along with spyware designed to record people’s key presses or details, the most common type of malware for Android is known as an SMS Trojan. This will pose itself as a respectable app, perhaps a free version of a premium app or a downloader for a popular game. On the surface, the malware app may work as intended, but it will also subscribe the user to premium rate SMS services. It is estimated that in 2011 alone, around $1 million has been stolen from Android phone users in this manner, and it is expected to get exponentially worse in the next 12 months.

Before introducing Android antivirus download list, here is some tips to protect your android phone from viruses threats.

Tips to protect you from viruses on Android

So what are the best mobile antivirus apps for Android to help protect yourself from this barrage of malware?

AVG android antivirus will automatically scan apps when they are downloaded, and will also scan new media when it is added to your phone via other methods (Wi-Fi or USB). Just like the desktop version, there is a Pro version and additional plugins to add extra security available for a small fee.

One of the things that has made AVG so popular on home computers is that the program is updated frequently, ensuring that you have the most recent protection on offer.

Lookout mobile security will scan mobile apps as they are downloaded, and will also rescan them on a daily or weekly basis. The best thing about Lookout Android antivirus is that is includes the “Find my Phone” mobile phone track & recover feature, similar to the service offer on HTCSense.com for HTC Android phones.

Using this service you can locate your phone if it gets lost or stolen, with the device appearing on a map. You can then remotely back up all of your important data and then wipe the phone rendering it useless to whoever has it. Lookout offers mobile security protection not just against malicious apps but also malicious people who may steal your phone.

Super Security is a cloud mobile Android antivirus app that is available for free download. It provides you with a ‘strongbox’ to store all of your sensitive personal data. Super Security includes many options, including virus scan, app manager, task manager and the ability to find your phone when it is lost.

This is another free android antivirus app that not only protects against malware but also offers on-line protection, identity protection and as well protecting against phishing and SMS attacks. Webroot automatically scans apps when they are added to the device. Like some of the other apps on this list, Webroot can also help you to locate a lost or stolen device.

Zoner is another free android antivirus apps can protect against malware, viruses, Trojans, dialers, worms and also protects your messages and phone calls. Zoner automatically scans new apps and gives you the option to scan your phone or SD card. Zoner can also protect your phone and SIM card if you device is lost, and help you to locate it in such an eventuality.

Android antivirus apps helps protect your valuable files, data and network from emerging viruses, spyware, malware, trojans, key-loggers and other threats. it is easy to use, which it checks your downloaded applications before you use them and has the ability to schedule scans so you never forget to keep your device protected.

You can even Backup and restore your photos, contacts, calendar, videos, call and SMS history and music (up to 50MB) on their cloud storage services

If you unable to find your lost android phones, Avast Mobile Security & antivirus can remotely lock the device or memory wipe in its advanced Anti-Theft component keep your data safe. Other mobile phone security are network meter, app manager, and even firewall (on rooted phones) give you complete control of your mobile phone.

Besides that, Avast Mobile security & antivirus is also an antivirus android tablet app.

TrustGo antivirus & mobile security is another android antivirus that you should consider, which the mobile app was was ranked #1 by AV-TEST for providing the BEST Android Security ANYWHERE!. Meanwhile, it offers comprehensive mobile security like Avast, Lookout and Norton without any cost.

• Security Scanner – On-demand or scheduled scans of your mobile phone or tablet and SD card to find and remove viruses, malware, spyware and trojans PLUS risky apps that can steal your data.

• Secure App Search – Our Secure App Finder Engine (SAFE) lets you search and download apps that you know are safe. TrustGo alerts you before downloading bad and risky apps.

• Secure Web Browsing – Get an instant notification when a site you’re browsing is known to be malicious or part of a phishing scheme. Default Android Browser, Google Chrome and Dolphin Browser are supported.

• Device Protection – Remotely locate your phone (Find My Phone), lock it, set off an alarm, or securely wipe your data and personal information if your phone is lost or stolen.

• Candid Camera Thief ID – Lock your phone with TrustGo, and anyone who puts in the wrong password 3 times will have their picture taken through the front-facing camera! We’ll email you the photo! 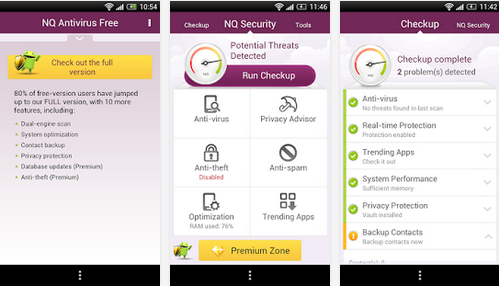 As recent malware apps like to disguise themselves as respectable apps you should always be careful that any antivirus app you download is not itself a virus. By reading customer feedback and sticking to well-known companies you can ensure that you get the best android antivirus protection available for your Android phone.

How to Recover Deleted Whatsapp Message

How to Make Sure Your Kids Use Age – Appropriate Mobile...

Free Tool to Help Your Small Business and Your Accountant

km - Nov 10, 2015
0
Designing your dream house layout on mobile phones or tablet devices has been easily with the Android home design apps that going to introduce...

km - Sep 18, 2012
0
Forex trading is an exercise that has changed beyond all recognition in the last decade or so, thanks largely to the way in which...

How to Recover Deleted Whatsapp Message

km - Nov 25, 2015
0
Whatsapp consider the most common messaging apps nowadays either on Android or iPhone. However, the bad things is that it doesn't store WhatsApp messages...